Story of the Stupid Dog Part 2

Currently staying in aunt's place in PJ. She has this stupid dog, coward, no balls and suk chun during thunderstorm, did I mentioned "no balls"?

Its been awhile that I didn't use coarse phrases in my blog, but today I just couldn't resist it. I would say this is so far yet the best Momofofo reviving come back post.

It was raining heavily yesterday when I came back. Due to excessive suk chunness, that damn stupid dog keep banging its head to the auto gate and surprisingly the gate opened. I guess thats how dogs become stupid, keep banging. Luckily I managed to stop the stupid dog from coming out or else I will have a hard time chasing it in the rain.

Later when I tried to enter the house, it rushed into the house and hid behind the sofa, shit. I took its chain to walk it out, it struggled and the collar went loose then it went back to the sofa. In the end I decided to carry the dog and threw it out of the house, god dammit dirtied my Guess tee. 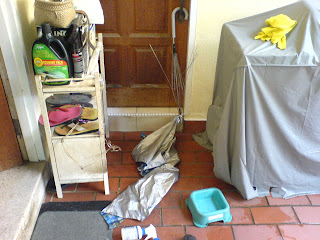 moments later I found out that it trashed my umbrella, damn dog

Today, I'm supposed to have lunch with my kawan-kawan and guessed what, *all ffk.

Bad day? Not yet.

It was drizzling outside, I was watching Sui Yue Fong Yun in the guest room behind the house. The stupid dog was scratching the sliding window wanting attention so I went to the living room, look at the it and it look back with pity eyes... and I closed the curtain, ignoring it. 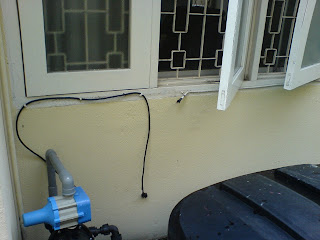 I went out furiously cursed the stupid dog then chained it with its spider friend beside the ping pong table. 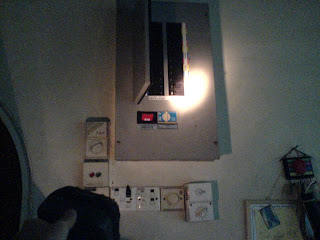 looks like Doom 3, after fragging a few monsters I then went to turn on the power

because the pump powers all the water in the house, most of the taps will not have water... good job stupid dog 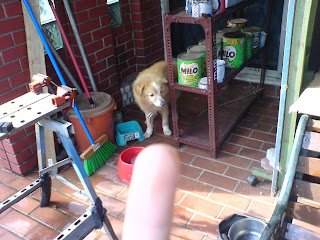 *no dinner for you tonight