Bukit Tinggi is the place where June wanted to go long long time ago, finally we went last Wednesday... WITHOUT HER sadly. Sorry June, its my nature to emphasize who didn't go.

At first I was lazy to go but since it was my good friend's birthday and the Pehmates treated it as a graduation trip, I decided to join them. There are still alot of time til graduation, a graduation trip now is kinda too early. If so, I think we will have 5 graduation trips :)

We woke up before 7am because Peh told us that we are leaving at 730am so we calculated the estimated time of leaving + Peh Estimation Algorithm (PEA) = estimatedly 8am but we were wrong... we had to play 2 rounds of kamehamehas and maze of the sliding bunnies. After we left Cyberjaya at 830am, we went for breakfast in Sri Petaling.

Bukit Tinggi is located slightly after Genting, we even saw the policemen, reporters and 38ers stop for finding the Nuri survivors.

After lotsa dizzy windings, we reached Bukit Tinggi. Luckily I was in the Camry or not I think I threw up already. Before we enter the hill, we have to pay 'toll', RM 16 per pax to enter Bukit Tinggi. 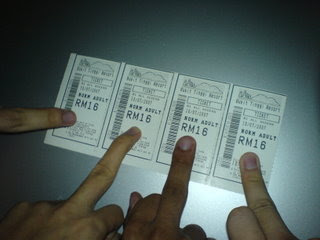 the first thing they did after leaving the carpark, grabbing any ball they see 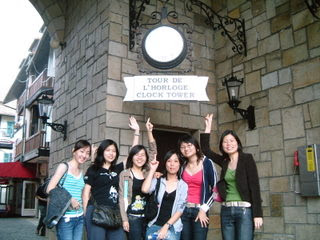 Pehmates Extended with the clock tower at the entrance 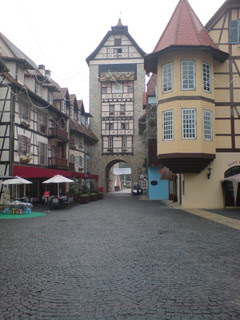 pic 1, inside the French village 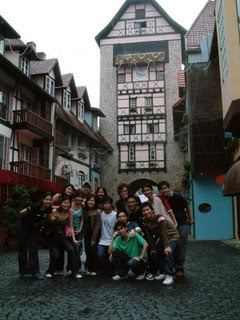 group photo inside the village 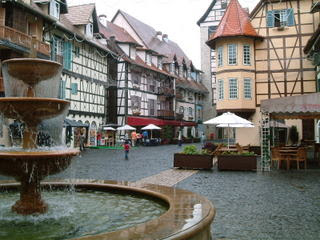 pic 2, fountain with nobody 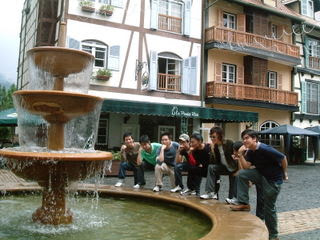 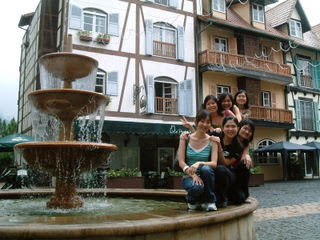 There are lotsa activities in the French village, one of them is coloring contest and lets see who is the champion... 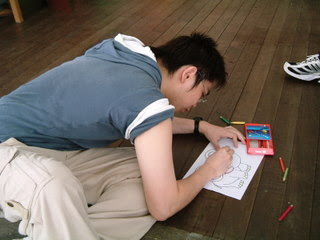 Donkey bullied all the small kids and won a box of fake Luna coloring pencils, lol 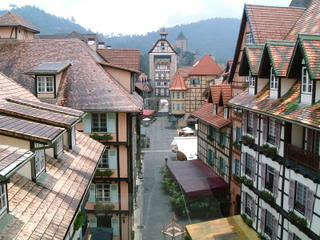 At the bridge entering the French village, there are swans in the pond below bridge which I called ducks 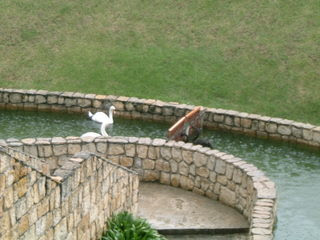 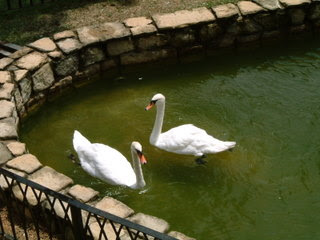 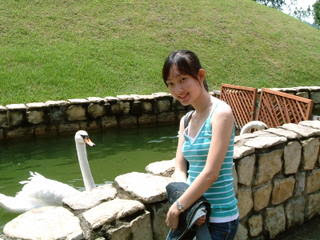 URH with the white duck swan 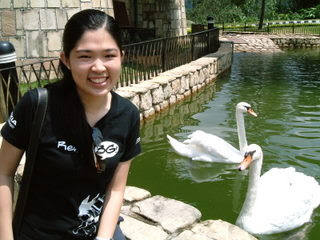 Grace with the white ducks swans 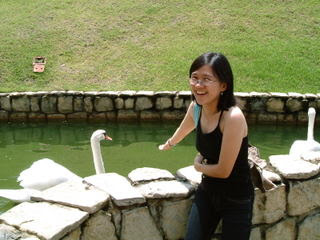 Pity that nobody bothers to take picture with the black ducks swans. 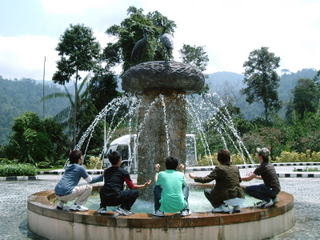 guys marking their territory before leaving the village. Notice one of them had a shorter water hose, lol

After that, we drove to the other side of the hill to go to the Japanese garden and botanical garden but before that, we have to climb for 15 min to reach there. 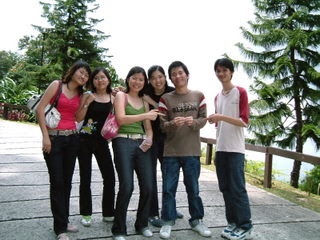 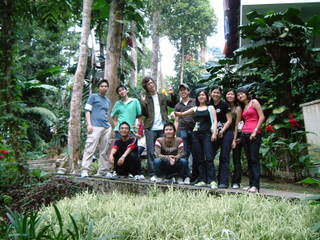 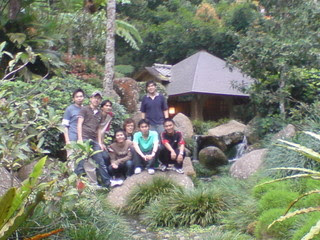 After that, we went to the rabbit farm below the hill, 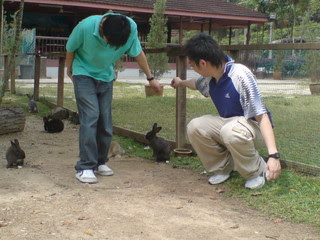 my Ex Bad Roomie making the bunny to stand while covering his ass just in case any bunny trying to attack his ass.

Luckily we went there as a day trip. If we went to stay there, we will be bored to death if we didn't bring monopoly, cards and the boring scrabblers.

717 The Bukit Tinggi Trip (The Graduation Trip 1)
by TS Choo No comments:

Last Wednesday, we went for Harry Potter at Time Square because my Ex Bad Roomie managed to book 10 tics for 6pm. My housemates reached there early because Donkey had to buy new com for his FYP, strictly not for DotA*.

me, my bro and Orange reached there at 5.30pm, I had a light lunch and the movie gonna show til kinda late so we went for tea. Not interested in having a full meal, so I remembered there is a kopitiam type of shop in the upper cinema of Time Square. The kopitiam is located beside Laksa Shack replacing Kebab King, near the Teppanyaki shop which sell sucky yucky.

When I was about to step on the escalator to go up, a workman stopped me and asked me to use anoother escalator because he wanted to service that escalator. Then Orange said, "It is fate that u are not suppose to eat there". Stubborn me, I insisted to eat there.

Station Kopitiam is big, they have more than 15 tables and around 8 staffs, most of them dreaming there. We sat down and look at the menu, most of them are local delights, no kopitiam type of food... weird. I asked the waitress is there anything light and she recommend me the roti bakar set (toast + half boiled egg + coffee) for RM 4.90. I ordered 2 sets for three of us.

We waited very long then they served us ONE roti bakar only, without any complain we ate that first. We waited very long again so I called the waiter which is still dreaming around. Later, the lady (she looks like the taije among them, the others are just plain noobs) came and told me that there are NO HOT WATER and they boiling. My first experience that a kopitiam do not have hot water.

Quite frustrated, I told her that I only got one roti bakar. We waited very long again then I saw this guy rushing up from the back stairs to the kitchen carrying a Gardenia bread. I was thinking, the roti bakar just now was a different type of bread, that Gardenia shouldn't be for me. 10 min later, my roti bakar came... YES, that Gardenia is meant for me :(

Finally there is hot water, the coffee and half boiled eggs came. We were rushing for the movie because it was 6.10pm so we went to the counter to pay ourselves.

Climax, the noob waitress push in my orders, RM 4.90 + RM 4.90 = RM 21. She turned to me and wanting to collect RM 21, we showed her a zzz face and asked her to check. In disbelieve, she used the calculator to calculated, RM 4.90 + RM 4.90 + tax, how come it is not RM 21, I doubt she passes her Math in SPM. Noobie her had to ask taije which is quite occupied with another client to handle the problem. In the end, taije calculated the correct amount and we rushed for Harry Potter which is also another disappointment.

After the movie, I only realised there is Uncle Lim at the ground floor :( God jammed the escalator to warned me about the sucky food in Station Kopitiam but I didn't listen, regretted.

Currently still in Penang, went for Transformers for the second time with my family yesterday. The movie is quite late, so went for a walk in the mall (Gurney Plaza) then we went to Parkson. and I saw this interesting toy in the toys department. 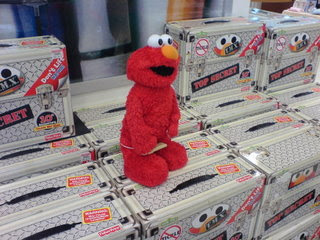 The 10th Anniversary Tickle Me' Elmo


The best part of the toy is after it fell down, rolled left and right, it can still stand up. In the clip, Elmo's rolling motion was blocked by the boxes, thats why he stood up facing back. He suppose to face front.

The first time I activate the toy, it almost fell from the boxes. Luckily I caught it, if not I am having this RM 199 toy at home right now. This toy is very entertaining, me and my sis laughed all the way til everyone in the toy department was wondering what is going on. At least we entertained those buyers in the long queue.

Later on, a kid came to play it. I decided to do a demo for the kid but unfortunately I dried Elmo's battery after playing it for more than 5 times, pity

715 10th Anniversary Tickle Me' Elmo
by TS Choo No comments:

Today, I came back to Penang because my bro wanted to. This morning, I grabbed a bun and a Kinder Bueno from Cyberia mini mart just in case Im hungry in the bus. I parked my car in ERL, Precint 9 yes, my car is still there now. While waiting for the train to come, my bro asked

After 20 minutes of Siemen clock staring, the train finally arrived and we hopped in. Trying to find nice seats so that we can enjoy the TV in the train but we ended up facing a fat dude as in rili rili fat which is big enough to block my bro's view to the TV.

Then we jumped to Star LRT in Tasik Selatan and reached Puduraya at 11+. My first or i can say my only choice is to buy Konsortium tics. but its a Friday, all Konsortium tics are sold out, my Konsortium fella recommended me another bus operator. Since they are the only operator which has seats to Penang, they raised their tics to RM 35 each !!! compare to typical RM 27, phucking blood suckers. I have no choice but to buy and the earliest bus is 2pm but we need to follow The Rules.

At 1.45pm (The Rule #3), a guy came to platform 21 shouting Penang, Buttorwot (The Rule #4) just like what the lady told us, so we followed the guy and our bus yg hijau baru is outside the street oh... its like Harry Potter, u need to go in between the platforms to reach the 'secret platform', din expect them to use in puduraya.

Hopped into the bus, plug in my earfon and I entered sleep mode. The next time i woke up, we stopped somewhere familiar... used to come here, Malaccan buses favorite spot, the corrupted 'Bus Federation' where all bus operators will stop for meal in a deserted place which the 'federation' charges 20 cents for toilet and I bet the 'federation' pays the operators to stop there, phucking blood suckers again. Not to mention a hippie came to kock with us.

Oh ya, I forgot to tell u guys the name of the operator, its Kejora Masyhur the TAK masyhur. Back to the bus, I unwrapped the Kinder Bueno, and I felt my RM 2.90 just got conned kena tiu by my bro for buying it sommore, shit.

Finally at 7.30pm , we reached Penang. Bad traffic in Penang, my dad said it happens every Friday for no reason.

Go to the lizard's ass got blood story, I was sitting on my bro's bed and my sis was telling me stories then I put my hand into the blanket and I felt something soft and slimy inside so I opened the blanket to see.

I saw a baby lizard with a broken tail, the fear is a factor lizard jumped down the bed and forgotten to bring along its tail. 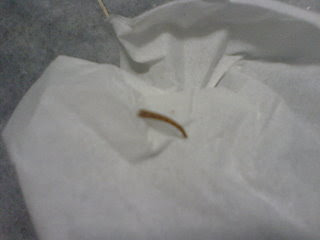 the broken tail is still moving the primary skool Science book is no bullshit, it rili moves 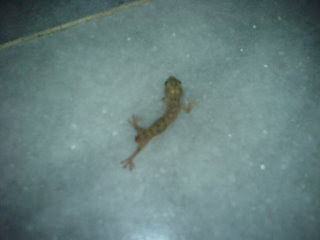 the baby lizard under the bed

so as a blogger trying hard to revive my blog, I tried taking lotsa pics of the lizard in different angles but I couldn't get a superb one with my phone due to bad lighting then my sis disgusted "yer, e a ka cui u huik or lizard's ass got blood in English" 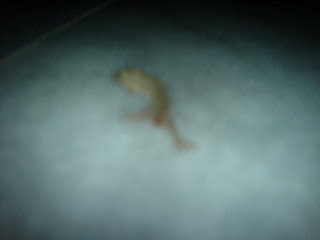 Its the wound of the broken tail not the lizard's ass got blood yes, im takin pic of a lizard's ass

714 Lizard's ass got blood
by TS Choo No comments:

After TC blogged his "since 2 years ago, i did not feel this kinda gaming mood dy" dota experience, 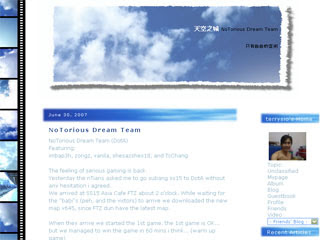 I decided to blog my own funniest dota experience...

Few days ago, the nTs had an inhouse -ardmscsp game:

after the shuffle player, our stands were 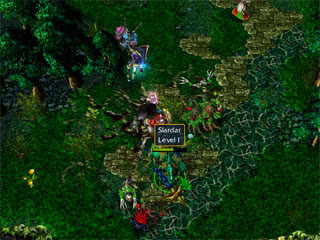 with Zong the Sladar got gbed and fbed by 3 Scourges, lol.

Then the Sentinels are trying to hard to gb Void the Sniper til we died 9 9.

The funny part of the game is when the Sentinels were roaming the map finding Tcchang to gb.

but the sad part was my com restarted when i was owning :( The game was very fun, no stress and no remorse, hunt the clan members u wanna kill most and do not spare Tcchang, lol. I got the replay thanks to Zongz. 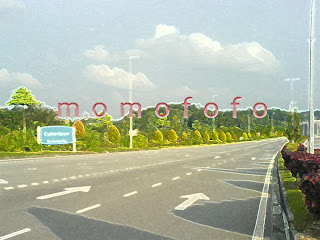 Felt kinda dumb doing this but i really do like my Cyberjaya shot and I would like to share it to my fellow friends :) Only available in 1024X768.