Date: July 18th, 2005 (Monday)
monday is morning class day :D finished class and met ROCKLEE on the way to library. since its spring, we have this sakura fest in mmu~!

and this is what we saw

people taking pictures in their own campus, LOL

we dont see this everyday :P

and believe it or not, theres even a fella who setup a website for these sakuras, here

library to study? NOP, ended up crapping with ROCKLEE. wanted to stay til 6pm but went back home at 4+ with the best excuse: hungry :P

and this is what we did

each of us ping him this much :P

so he went internet options, made some changes... nothing happened, LOL. so he adjust his monitor screen,

oh my god... does it helps? and hopelessly looking at his friend surfing internet at full speed :P

having hundred of pinging command runnning, i have to stop pinging to upload these pictures so we decided to ping his friend, unix14. finally he has connection, he went airasia trying to check the flight schedule. then MILO said "ping him back" LOL

having a hard time surfing, he decided to download some software called packet tracer wor... maybe can trace whos the one who is screwing with him, so to be safe, i changed my ip and MILO restarted his com :P

CCNA lab is the best time to have fun :)

Date: July 23rd, 2005 (Saturday)
HaAgEnDaAz Converse Trip 2 featuring probation member, GOLDFISH
this is our second HaAgEnDaAz Trip out to search for converse shoes :D reached there at lunch time, everyone is hungry but we stoned there for 15 minutes to think where to eat. so finally we decided to eat in manhattan, when we got there... its under renovation so we stoned there for another 15 minutes again...

so we decided to go for sushi king, on the way there SOMEONE saw tepanyaki

SOMEONE: lets go tepanyaki
me: haih girls, see one want one
GOLDFISH: girls arent like that wan

so we ended up eating there :) after meal we went to the converse shop tengok-tengok. there are less model compare to 1U, think think, converse not worth to buy ler... ended up all of us came out without shoes :((

went zara too, the discounted jeans no size :( shud hav bought that day :( ended up buying in levis. mega sale, buy in shop which no sale, dem stupid sial :P

came back cyber without converse :((

what are other cyberjayers doing? 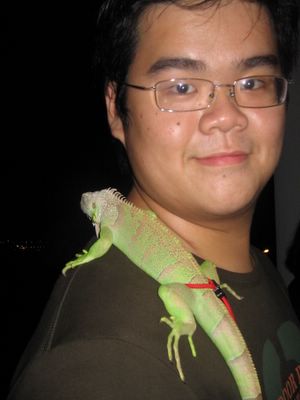 DUDE and SWEET from dude, wheres my car?

PUCAT's Story
DEGIL spotted some 'interesting' typo in her blog

she called PEHBOY, my peh :D

mr peh, this is the real typo :P

is that a compliment or a disgrace? :P

and theres an evil force headed by

saruman and his two towers

with a mission to get the hobbit's

but he was stopped by an IMBA wizard called

gandalf: you shall not pass!!!

after saruman's ass was kicked by the yellow deer