214 Before and After Midterms

its been since awhile i stopped blogging due to midterm... quite of forgotten what stupid things happened around me :P

Date: August 17th, 2005 (Wednesday)
went to campus for lunch, found a nice carpark behind foe... then i saw the black savvy parked beside my car... toh sui kah car!!! then walked up the stairs then noticed that i didnt wear my watch = bad luck :( entered sirah utara dropped my bag then just before taking my rice then i noticed i didnt bring my wallet =)) now i know whats the warning about...

after these tohsui incidents in this week, we have decided to chak heong in our praying table for the first time :)

paiseh ya didnt go thru my organizer during the weekends, din notice its your birthday... happy belated birthday :)

Date: August 23rd, 2005 (Tuesday)
what the... mummy went vietnam kai kai with her girlfriends and daddy went jakarta to play golf... shiok sial and left my bro and sis in my grandma's place LOL pity pity no comp to play :P

after exam bad mood? no worries, theres always dota to entertain us :D

Date: August 25th, 2005 (Thursday)
after NOVEMBER's exam, we went bowling in alamanda for the night :)

we went in 2 seperate cars, so the peh mobile (PEHBOY, BUAYA, THE-BAD-ROOMIE, NOVEMBER and DECEMBER) went first and we (TURTLE, DONKEY, DEGIL and me) meet them there :)

when we reached there, gave them a call asking where they are eating... and BUAYA said they are eating in bli~bla~bli~bla (he dont even know where hes eating, say it say it) beside starbucks. then TURTLE and DONKEY said its expensive stuffs lets eat somewhere else. and this is what happened

so we walked to rasa and sat down, so i asked what are they gonna eat... and all of them said not eating WTF??? then i asked why? then DEGIL said he wanna eat 'rasa ayamas' (take note that the fullname of ayamas is 'rasa ayamas'

, phucking hell next time please name your shops properly!!! dont make the customers got confuse of your names) not 'rasa' or 'ayamas' cilabang, we walked all the way here then only walked back to ayamas... from now on we call 'rasa ayamas' = ayamas ONLY!!!

after a nice meal in ayamas or rasa ayamas, we headed to bowling alley... 5 bucks per game, wth... expensive sial and this is the stupid part we checkout the student rates, it goes like this... normal rate before 6pm is 3.50 per game and the best part is student rate is 3.50 per game before 6pm also!!! mr manager please take out your normal calculator to count, maybe u are just not good in using the cosines and sines in your scientific calculator.

after awhile they came and we held a meeting to decide whether to play bowling, since we came so far for it might as well just play 2 games :) then DECEMBER with her new hair cut :| trying not to laugh :P and she purposely wore skirt so that we cant force her to play, jahat!!! FEBRUARY, u asked her to wear skirt at the wrong time!!!

the left lane: DONKEY and DEGIL aka sh teamed to play, DONKEY muscular take ball 14 and whacked all the way, cun cun and DEGIL jackassing all the way. THE-BAD-ROOMIE aka sa after he throw the ball, he will goyang goyang abit, haha the ball is too heavy for him :P NOVEMBER aka june (how come she gots to use her own name???) she play rrr? not bad gua... still lose one point to my longkang streak LOL =)) just pray for her to longkang enough d, she even practices in sa's game and she scored wonderfully in his game but when she plays hers, enter longkang again =))

the right lane:PEHBOY aka pehpeh (no comments) this fella same as sa wan but far more worst, he throw the ball d rite he will back step till others people lane and almost bang sh, pehboy please behave, dont gay gay :P imba TURTLE aka CGPA (wanted to put in the number 4.0 but they didnt know how to use the comp) hooked and owned all the way, ABC;s only challenger!!! whoa BUAYA aka abc imba sial throw dem straight and strike and spare all the way, gosu big bullier!!! and me aka mofo, hmmm... not bad gua... still longkang streak but some throws are quite nice, then theres once i put my thumb too deep into the ball and it got stuck when i threw it and went it straigth into longkang, this is the time when june jump for joy :|

thx to CGPA im ahead of june by one point :P with this, she wanted to go back penang to train =)) after the wonderful game, we went back home and dota again :)

While presentation, going 12 dee.. kenny aka peh wif ven and kiat go ajak me makan lunch la.. so me say y not go makan at the "kali paan mee" ther la for breakfast (which was lunch time dee) coz nice mar.. =P (maybe too me ni la) So, went into kenny car (he driving) and off we went to dengkil makan brunch. (breakfast + lunch) ^^, Reach there and order or makan and waited for the food lo. Den wen the food come, we all still check the whole bowl of mee to see whether or not got extra "side dish" inside.. =P (as for this matter, i dare not post it here coz i still love to eat the paan mee and i want u go there eat also.. hehe..) well, maybe it was bad luck for weizhi dat day coz dat day wen she go tapou mee she too preeettty dee~ so they got the extra "side dish" with the meal lo~ =P hehe.. (they dint even charge her extra sial! LOL!!) anyway, after searching high and low, left and right, from bottom to above.. CERTIFIED CLEAN!! =D we all ITADAKIMAS~ (in naruto style~) After the meal, wen time to pay the bill, kenny go treat me wor.. ala, guyz, takan wanna treat meh, so me say kenot la, but he insisted.. so ok lo.. =) thanks alot man. its also manners to accept a gift from someone.. did u know dat? (ALA!! should have ordered something more expensive-er mar.. =P can ar? hehehe..)
by ROCKLEE in http://readingycblog.blogspot.com/

today's mw2 lab by DARLIE, in this lab i gotta know all students from microwave... suckas... in beginning of beta when we got our entry letter for beta i took a look the name list of all students in microwave... only 9 wtf??? now 1 have left and 1 have changed major theres only 7, minus me thers 6. the 'fantastic six' are CAMERAMAN, ZOMBIE, PEH's-BROTHA, some cls fella, ROXY's housemate and TANYIFEI's daughter.

wanted ( i guess ) to follow THE-BAD-ROOMIE all to go for the ieee power grid trip but overslept :P most of the people in cyberjaya went back to hometown or went kai kai d... so must find people to eat with, so i messaged C3P0 for kangtaos and he said hes eating with CURRY so i asked to join. they wanted to eat in chi pao kai. later CURRY cant wake up. so ended up im the driver, then GRACE asked PUCAT to come along, no problem...

we are suppose to leave at 1230 but we waited... and waited... and waited for PUCAT to makeup to eat in chi pao kai serdang. finally she turned up and we went to pick up GRACE and C3PO and GRACE is carrying bags so i asked wheres she going and she said damansara and dropped her at ktm in serdang... ummm for your info... ktm serdang > sentral > lrt tmn bahagia bit far also right? so i offered to drop her in damansara atria the old junk there.

so we ate in chaoyang ss2 :D ordered their prawn noodles, and GRACE ordered chicken rice cause she cant eat spicy foods. then C3PO tapaoed the chicken rice for CURRY and ordered one for himself also. after that i was looking both of them eating chicken rice... tempting and i ordered too :P then GRACE ordered bachang, yucky cold wan.

after dropped GRACE at atria, we went 1U to watch redeye, a horror movie :D 1U was full with cars so we had to park outside. when we reached there, we are figuring how to get rid of CURRY's chicken rice, then PUCAT suggested to give to those people who hand out flyers at the carpark ticketing area... after we walked a few steps, its so far... lazy to walk la. so we decided to walk and if we sees a hak yi or something then we give it to him but theres no hak yi except for shoppers in 1U so we decided to put on top of the fire hose hoping that some mofo will pick it up and enjoy CURRY's chicken rice :P

Lisa Reisert hates to fly, but the terror that awaits her on the night flight to Miami has nothing eveything to do with a fear of flying ghost. Moments after takeoff, Lisa's seatmate, Jackson menacingly reveals the real reason he's on board: He is an operative in a plot to kill a rich and powerful businessman spook around, and Lisa is the key to its success. If she refuses to cooperate, an assassin another ghost is awaiting a call from Jackson will kill spook her father. Trapped within the confines of a jet at 30,000 feet, Lisa has nowhere to run and no way to summon help without endangering her father, her fellow passengers and her own life. As the miles tick by, Lisa knows she is running out of time. She desperately looks for a way to thwart her ruthless captor and stop a terrible murder spook fest.

after that C3PO and me tapaoed subway back to cyberjaya for dinner :) and to our surprise, CURRY's chicken rise is still on top of the fire hose remained untouch =))

came back home then THE-BAD-ROOMIE and PEHBOY them just came back and lansi me with their so called hebat dinner, got fish, yam basket blah blah blah

the nite ended with another game of dota, used bane hollow which the wolf ulti is capable of killing any hero... then this is what happened i was trying to kill someone, its redlife d and one hit will kill that fella, then PEHBOY turned up with his bounty hunter and killed the fella, im so pissed that i message him ks-er then this is what he replied "a bit a abit la" wtf??? and taught me some sohai -recreate and ended up my hero exercising in fountain. for further details please ask VANILA!!! or download the replay and watch it for yourself

hope she buys present for me from vietnam instead :P

woke up 715am, NOVEMBER said she will join me joggin this morning and she said she will misscall my handphone to wake me up... no misscalls kononya...

after brushed up and to be prepared i put this status

to zha kao her

but manatau shes already up giving excuses like "cant get thru your fon la, i woke up at 7 d wan" hahhaah

so we went jogging walking to cyberpark

just to prove that i did wake up, i made a screenshot of the time

gurantee no photoshop or time changing :)

The Return of Minnie

do u guyz missed me blah blah blah...

DOLLY's Flower
hey where's BUTTERCUP's ikea incident, im just about the summarize it then i think she removes the post... too late 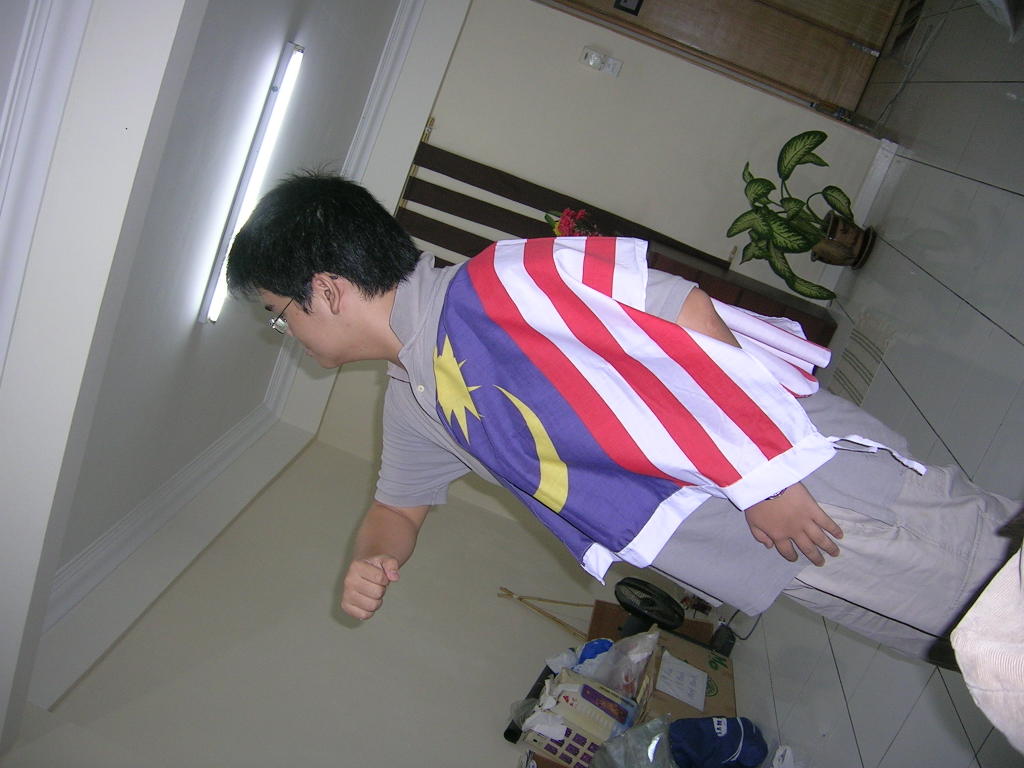 merdeka man, seriously DUDE u need to resize your pix before uploading, ppl with 56k will have trouble loading it

haha im momostevie :P as complimentary, i will think of a better name for PUCAT liao =))

in loving memory of her swatch...
if any of u saw this pls contact her :)

Struggling to be THE-BAD-SLUT
haha finally he has updated his blog :D
by TS Choo